Viktor never let himself be brainwashed 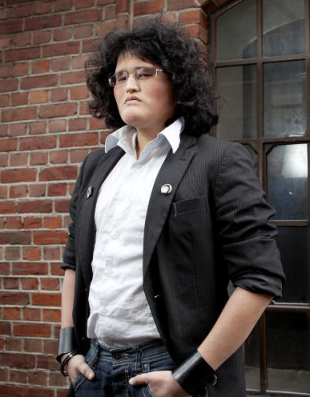 A Glenwood woman is fighting for a South African identity document and also to be recognised as a female South African.

Complete article: Click here
Posted by OII: http://www.intersexualite.org/ at 6:34 AM No comments:

he first International Sex and/or Gender Diversity Day has been declared 26 April and will be an awareness day and celebration of the existence or sex and/or gender diverse people, writes Tracie O’Keefe.

Sex and/or gender diverse people are encouraged to have picnics, tea parties, festivals or gatherings in their part of the world, inviting their family, friends and allies to join them.

We will be visible in all our sex and/or gender variations. It is for all intersex, transexed, transsexual, transgendered, androgynous, without sex and gender identity, cross-dressers, sex and gender fluid, transqueers, genderqueers, etc.

It is a day to have a picnic, tea party, gathering or festival wherever you are. In my 1999 book Sex Gender and Sexuality: 21st Century Transformations my research calculated that at least 1% of the world’s population is sex and/or gender diverse.

Posted by OII: http://www.intersexualite.org/ at 12:36 PM No comments:

Petition to the International Olympic Committee

I was recently filling out our 2010-census form and I realized that once again I had to inaccurately settle on gender for one of our children. I wanted or needed to be able to have more choices on the census form. While I don’t personally like the term “neuter”, I applaud Australia’s willingness to alter Norrie May-Welby’s birth certificate to better represent this person’s gender.

When I hear an expectant parent announce the exact sex of their child prior to birth, I cringe. I wonder how can a picture tell the child’s story?
Complete article: Click here
Posted by OII: http://www.intersexualite.org/ at 6:23 AM No comments:

Semenya to compete in June

- CASTER Semenya, the 800 metres world champion at the centre of a gender verification row, will return to competitive athletics at an international meet in on June 24, she said on Tuesday.

The 19-year-old South African underwent gender verification tests after she won the women's 800 at the world championships last August and has not run competitively since.

The athlete attempted to run at a meet in on March 30 but was prevented from doing so by ASA.

'I believe the decision to bar me from competing in Stellenbosch last week was unlawful and wrongful,' Semenya said in a statement on Tuesday. 'I have, however, considered the request by ASA that I await the conclusion of the IAAFs' processes by the beginning of June this year before I return to competitive athletics.

'I have also instructed my legal representatives to seek confirmation by the IAAF that it will complete its processes by the beginning of June.. Together with my coach and agent, I have therefore decided that I will return to competitive athletics at the European Athletic Association (EAA) meet to be held on June 24 in ,' Semenya said. Semenya added that, based on medical and legal advice she has received, there were no 'impediments' to her competing in female athletics competitions. -- REUTERS

Posted by OII: http://www.intersexualite.org/ at 7:06 AM No comments:

Hida Viloria, human rights spokesperson for Organisation Intersex International-USA (OII), and Curtis Hinkle, founder of OII, join us to talk about what the intersex and disability movement have in common—and what they don’t.

OII is dedicated to resisting the medical model and non-consensual medical treatment of intersex people. They promote a holistic human rights and person-centered model. They regularly reach across cultural and language barriers to support and improve the lives of Intersex individuals on six continents. Don’t miss this mind-expanding discussion. Eddie Ytuarte and Adrienne Lauby host.