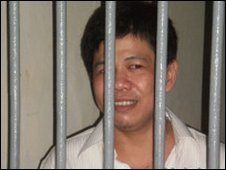 A man has gone on trial in Indonesia accused of falsifying his gender identity in order to marry a woman.

Doctors say Alterina Hofan has the rare condition Klinefelter's syndrome, where a male has an additional X chromosome that makes him look more like a woman.

He says he officially changed his identity papers to show he was a male but his wife's parents have accused him of document fraud.

Mr Hofan is being held in solitary accommodation in a women's prison.

The BBC's Karishma Vaswani in Jakarta says the case has incited public debate over the treatment of transgendered people in Indonesia.

Mr Hofan's mother told the BBC that when he was born, doctors said he was a girl, so he was registered and brought up as such.

But when he was two years old he began to develop male genitalia and had always behaved like a boy, she said.

Mr Hofan has said he always identified himself as a man and as he grew older, he had several operations to reduce the more feminine aspects of his appearance.

He says that in 2006 he successfully applied to have his gender changed on identity documents, officially becoming a man.

In 2008, he married Jane Hadipoespito in the US, but her mother objected to the relationship. She filed a case against him accusing him of falsifying the documents and misleading her daughter.

The case was further complicated after Mr Hofan was arrested. He was sent to a male prison but, after police DNA tests ruled he was a woman, moved to a female detention facility.

The staff at that prison, however, ruled he was a man and could not be accommodated with female prisoners. He has since been detained in private facilities at the female jail.

Mr Hofan's wife, meanwhile, has said she knows about his past and does not want to be separated from him.

"All I want is for my husband to be freed as soon as possible," she told the Jakarta Post last week.

Indonesia's National Commission on Human Rights has criticised the authorities for their treatment of Mr Hofan.

"He has the right to say he is a man," Josep Adi Prasetyo told the Jakarta Post.