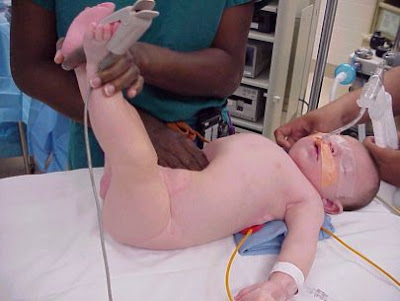 This month (November) the Canadian city of Toronto will host the III World Congress on Hypospadias and Disorders of Sex Development. The conference runs from Thursday, November 12, 2009 - Sunday, November 15, 2009.

Among some intersexed groups it is colloquially becoming known as “Hack 'n Hope”.

Whilst the Disorders of Sex Development (DSD's) terminology is contentious - at least among many of those to whom it is applied - Hypospadias repair in its more common forms is not. In most circumstances hypospadias repair does not attempt to 'assign' a so-called gender identity and gender role to a child. That said there is no good evidence that males will grow up doubting their masculinity if they need to sit down to pee because of hypospadias.

Despite the dearth of substantive evidence that genital surgery is necessary for psycho-sexual development the highlight of the Toronto (Hack ‘n Hope) conference is touted as 'SURGICAL DAY'.

If the Feminizing Genitoplasty involves gender assignment there is a 33% chance that its infant recipient will reject it in adolescence or adulthood. It may also involve a clitoral reduction because that highly enervated organ dare not extend beyond an arbitrary average without becoming 'read' as penis, and cut down to an acceptable size.

As we see, the new terminology, DSD or Disorders of Sex Development, is a form of semantic terrorism that experts have used to justify mutilation and sex assignments without consent.

WHAT IS SEMANTIC TERRORISM?

1. The willful or reckless perpetuation of beliefs or stereotypes, orally or in writing, that undermine the public and personal safety or well-being of a target group.

2. The spreading of pseudo-scientific opinions and psychological theories that negatively impact on any target group, or that create or stimulate social apprehension directed toward that group.

3. The creation of a public or social sense of danger and/ or uncertainty through the assumption of knowledge and power over a target group, such as to discredit them and remove both their autonomy and their ability to reasonably predict their own outcomes.