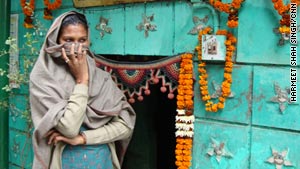 New Delhi, India (CNN) -- Dotting a crammed neighborhood in the Indian capital are homes that can be easily located without addresses.

Say "hijras," and residents and shop owners at New Delhi's Beri Wala Bagh will give quick directions to houses where India's so-called third gender -- intersex people and eunuchs -- live together in well-kept homes intermingled with businesses and temples.

Intersexual refers to a variety of conditions where there is a discrepancy between a person's external and internal genitals.

On Friday, the groups won a longtime campaign to be listed as "others" instead of male or female, on voting forms. This was seen by many as a way to acknowledge a separate, unique identity.

Despite some strides, the hijras -- loosely called eunuchs in Indian English -- continue to face widespread bias among India's largely conservative population. At one time, eunuchs were valued as trusted loyalists of India's Mughal emperors, in power until the late 19th century.

Hijra homes are their "monasteries" -- each with a revered supreme head, or guruji.

"Our guruji is not in town. Sorry, it's the guruji who can speak, not us," said one resident of the New Delhi neighborhood.

Dressed as a woman, Pavitra, a eunuch from a hijra home designed as a shrine, was willing to help. In her hoarse male voice, she summed up what the community is mostly associated with in modern India.

"We earn our living by blessing and dancing at celebrations," said Pavitra, who uses one name.

Tips from their own network guide them to families celebrating male events: wedding of a son or birth of baby boy.

Most families welcome hijra blessings but dread what they fear could be a curse.

"This is where lies a cultural sanction to their (hijras') existence in India," said Anjali Gopalan, head of the nonprofit Naz Foundation, which campaigns for the rights of sexual minorities in the country.

So while some hijra residents may have sources of economic sustenance, their community remains an object of derision, Gopalan said.

Many third-gender people end up begging in the streets and at traffic intersections. Some turn to prostitution.

In India, most hijras are believed to be eunuchs, or castrated males, and those without economic means adopt a hijra clan.

"They feel like being trapped in a body not their own," Gopalan said, adding that despite many beliefs to the contrary, there was no evidence of forced castration.

Gopalan hailed as a "fabulous step in right direction" India's recent voting rights change, following a long campaign by eunuchs and intersexuals to be listed as "others" instead of male or female on electoral rolls and voter forms.

The groups wanted the option.

However, Gopalan said they remained barred from the rights to inheritance, marriage and the adoption of children.

"It's a whole new journey ahead," Gopalan said.

Asked about her new right as a voter, a smiling Pavita responded, "What will change?"

Before I spoke with her, she didn't know about the option to ask her election officer to replace what she told me was an "M" for male in the gender box of her voter card with an "O." It wasn't clear she wanted to.