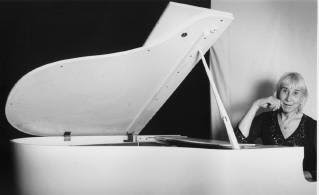 "My mother told me something and it became very evident to me once I was able to make comparisons. I was born into what was called the intersex space; there was clear and obvious genital ambiguity. I had to have surgery when I was only a few hours old. I had my last surgery when I was 28 years of age. The only people I was able to make my observations from growing up were my brothers. Once I became aware of the female shape and constitution I knew something was seriously wrong."

You can find the full interview here

On Wikipedia the fact of being intersex is not mentioned, instead the article focuses on Dee Palmers m/f transition.
http://en.wikipedia.org/wiki/Dee_Palmer

This is a serivce of the
Organisation Intersex International
Posted by OII: http://www.intersexualite.org/ at 9:44 AM