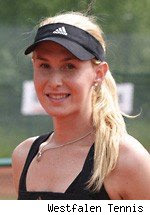 Posted Mar 13th 2009 6:05PM by Tom Mantzouranis (RSS feed)
Filed Under: Media Watch
Sarah Gronert, a 22-year-old pro from Germany, finds herself under scrutiny from her opponents and their coaches, who believe that a unique gender issue from birth should make her ineligible for the woman's tour.
Three years ago, those issues almost caused Gronert, ranked No. 619 in the world, to abandon her career. Though she has since returned to competitive tennis, the dialogue that continues to surround her relates not to her ability, but to her biology.
Gronert was born with male and female genitalia. After undergoing surgery, she's now medically certified as a woman. That's not good enough for some, though.
"There is no girl who can hit serves like that, not even Venus Williams," said Schlomo Tzoref, the coach of Julia Glushko, who Gronert recently beat on her way to winning the Raanana tournament in Israel in early March. "When I heard her story, I was in shock. I don't know if it's fair that she can compete or not. She does have an advantage, but if this is what the WTA have decided, they probably know best. If she begins to play continuously, within six months she will be within the Top 50.
"It's tough to piece together the details of Gronert's story. Her story has yet to really reach American shores, so facts have to be parsed together from various foreign language websites. Yet Tzoref isn't the only one who sees the potential for Gronert to climb the ranks of the women's tour, which will surely lead to more conversation -- and infamy -- around the world regarding her standing on the tour.
We do know that, at 19, the harsh words and treatment from peers almost led Gronert to retire. Instead, she underwent surgery to remove the male genitalia and, after a struggle with the WTA that needed a petition and special committee to resolve, was allowed to compete again.
Gronert has appeared in nine tournaments in the last three years, winning two -- the Raanana tournament on March 2 and the German Kaarst tournament on January 19 -- this year. The purse for both titles was $10,000 each. Her competitors feel she had an unfair advantage towards winning those purses which will lead her to continue to rise in the sport unfairly. The longer Gronert competes, the more fevered the conversation grows (her Wikipedia page was deleted due to constant abuse by users).
"This can not be. This is not a woman, it's a man. She does not have the power of a woman and no woman has such a technique," Tzoref said. "She serves like a man. It's very strange.
"Elie Seckbach contributed information and translations to this story.
Source: Click here
Other articles online:
Professional Tennis Star, Born A Hermaphrodite, Ignites Controversy
Tennis Player Sarah Gronert in Gender Debate
Sarah Gronert: A new tennis gender war?
Rising Tennis Pro Faces Gender Battle
German tennis player Sarah Gronert embroiled in gender controversy
This is a service of the Organisation Intersex International
Posted by OII: http://www.intersexualite.org/ at 8:00 PM