Santhi 'medal should be returned' 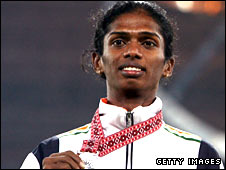 Indian athlete Santhi Soundararajan's 2006 medal should be returned to her if Caster Semenya is allowed to keep hers, an Indian athletics official says.

Soundararajan was stripped of the 800m silver at the Asian Games after failing a test and later attempted suicide.

Tests on Semenya, who won 800m gold at the world championships in Berlin last month, are likely to show that she has an "inter-gender condition".

BBC Sport understands that Semenya will not be stripped of her medal.

Lalit Bhanot of India's Amateur Athletic Federation told the BBC that India will take up Soundararajan's case if Semenya was allowed to keep her medal.

"Rules should be equal for every one. Why should not Soundararajan get her medal back? If they give the medal to Semenya, we can think of fighting [Santhi's case] with the international authorities," he said.

Soundararajan told the BBC Tamil Service that the Indian authorities had not fought her case after she was stripped off her silver medal at the 2006 Asian Games in Doha.

"I was not given a chance like Caster Semenya. I don't have the capacity to fight a lonely battle due to my economic condition," she said.

Soundararajan, 28, said she was shunned by her local community after being stripped off her silver medal and banned from competing by the Indian Olympic Association.

"Had I been given a chance, I would have won a gold medal in Olympics. Because of the discriminatory attitude of the sports officials I was left alone and all my sports career ruined and my dreams shattered once and for all," she said.

She participated in eight international competitions and won 12 medals before being banned.